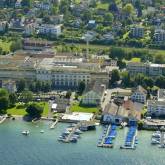 Since the beginning of 2021, Peru has been part of the Lindt & Sprüngli Farming Program as one of our country of origins for cocoa beans. Cocoa cultivation did not start in the South American country until around 1980, yet the plant is very important to farmers in Peru: It gave them a new perspective for a resilient livelihood.

The beautiful South American country Peru is well-known for its lively capital Lima, the Machu Picchu as well as other impressive Inca ruins. What many do not know: The South American country is also very known for its great diversity of cocoa. As of 2021, Peru has been one of our origin countries for cocoa beans and therefore part of the Lindt & Sprüngli Farming Program.

The commercial cultivation of cocoa – and thus the start of the cocoa boom – began in Peru in the 1980s. Prior to that, the cultivation of the coca plant was widespread in the country, which is used as a raw material to produce cocaine. Thanks to the support of the government as well as the United Nations, the conversion to cocoa cultivation could be sustainably promoted and implemented. For this reason, cocoa is also perceived as the “crop of hope” in Peru – as a legal alternative to coca.

Today, cocoa is grown in a professional manner and around 50,000 farmers work in the industry. They are proud of their plantations, which have provided them a steady source of income as well as improved living conditions.

Incomparable taste thanks to high biodiversity

Over 90% of Peruvian cocoa comes from the Amazon basin east of the Andes. The country has one of the highest overall biodiversity in the world and the different natural growing areas sets it apart from other countries. Because it grows in such incredibly diverse regions, the cocoa plant encounters many species, soils and climates. This results in an unparalleled spectrum of unique flavor and high quality.

Peruvian cocoa farmers differ from others by using a pair of pruning shears as their main tool, which they tend and care for, instead of a machete. The plantations are on average one to five hectares in size – rather small in comparison to the large fields in Ecuador. However, this does not mean that the harvest is correspondingly small. On the contrary: Thanks to the farmers’ good know-how and their systematic cultivation methods, yields are very high in Peru.

Many farmers have been schooled in cocoa cultivation by the government from the very beginning, creating a good foundation of agronomic know-how. The approximately 850 farmers who are part of the Lindt & Sprüngli Farming Program receive further individual trainings and coaching and are supported in the use of tools and organic fertilizers.

Cocoa is the primary income for most Peruvian cocoa farmers. Some additionally grow products for their own consumption, such as plantains, yuca, citrus fruit, mangos, and other tropical fruit. Greater income diversification is one of the objectives of the Lindt & Sprüngli Farming Program.

Lindt & Sprüngli / In 2008, we have launched the Lindt & Sprüngli Farming Program in Ghana and in the subsequent years in all our other cocoa bean sourcing origins (Ecuador, Dominican Republic, Madagascar and Papua New Guinea) to improve the livelihoods of our cocoa farmers, their families, and communities. One of our top priorities is to ensure that they are able to benefit directly from our financial support.